What The Pros Rarely Say About Small Pocket Pairs

While there may be a generally accepted by-the-book way of playing small pocket pairs in no limit hold’em (i.e. only play them cheaply from late position and only continue if you flop a set), I would like to give my own thoughts about these potentially valuable holdings in this strategy article.

For the sake of clarity, I’ll call “small” pocket pairs 22-77 as the same general rules can apply to all of them. With any of these pairs you will almost certainly face an overcard on the flop and almost certainly are they in major jeopardy if they don’t improve.

Thus, your goal should still be to spike that set (hit a third of your pocket pair) on the flop. With that in mind let’s explore some of my tips for making these hands as profitable as possible in online small-to-middle stakes games.

While this is true about every hand, you shouldn’t overlook it when considering how (or if) you’re going to play a small pocket pair. Hands like pocket fours increase in value as you get closer to the button.

If you’re acting after everyone else preflop, you have more information available to you such as how much you’ll have to call to see a flop and if any of your opponents tried to show strength by raising the pot.

Besides that, you’ll be able to act last on each subsequent betting round. While this may sound like Hold’em 101, don’t overlook this important concept when playing these mini pairs. In an aggressive game, routinely limping in with small pairs in early position is a mistake.

You’ll often wind up in an unwelcome situation when you get raised and face paying more than you wanted to only to act out of position on the flop. 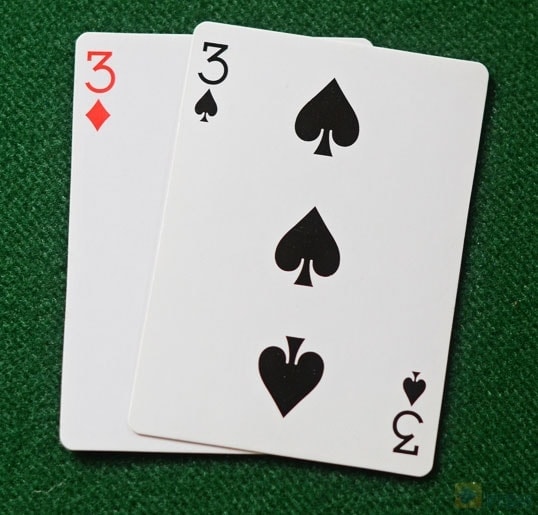 Stack sizes also dictate the value of your small pair

Small pocket pairs go way up in implied value when the stacks are deep at the table. This is because you can expect to win much more when you do hit your set on the flop. In a $1/2 game, playing pocket deuces from the button makes more sense if you and the other limpers have $300 rather than $50.

If you or your opponents have fairly small stacks, it isn’t a great play to invest a good portion of your remaining chips looking to hit a set on the flop. If you or your opponent is probably going to end up all-in anyway, you should either wait for better starting cards or just shove it in preflop.

However, keep in mind that if the stacks are deep (100 big blinds or more), small pocket pairs become more playable. You can invest a small amount to potentially win a massive pot.

In passive games you can play more small pocket pairs

As mentioned in tip #1, position plays in important role partially because you don’t want to face a lot of raises out of position. However, in passive games without a lot of preflop raising you can safely play all of your small pocket pairs.

After playing a few rounds with the same players you’ll be able to read the general playing style of the table. If you face little chance of being raised preflop and lots of players like to limp in, why not play any pair from any position?

While it’s still preferable to be in position after the flop I will still take the opportunity to get in cheaply with my pocket threes or fours. Occasionally, you should also raise with your small pairs to mix up your game.

When you raise, one of two positive results can occur: you can either win the pot uncontested or you build a pot for those times that you do flop a set. 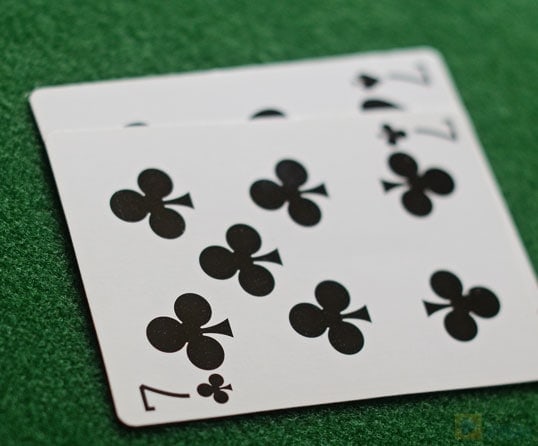 Which hands you want against you with small pocket pairs

While the old poker adage may advise you to flop a set cheaply with a small pocket pair at all costs, unraised pots will probably earn you the least return when you flop a monster.

With pocket fives in a $1/2 game, I think that is wrong to think, “Well, he was first off and raised it to $8. He probably has Aces or Kings so I had better fold.” In fact, you should want to be up against a big pocket pair when you have a small pocket pair. Why? If you flop a set, you’re likely going to take all of your opponent’s chips.

I realize that the odds of hitting a set on the flop with a pocket pair are about 7.5 to 1 against (about 12%), but if the table has deep stacks and you double up 12% of the time you call the $8 it’s a no-brainer +EV decision.

Let’s assume that your under-the-gun opponent has pocket Aces and raises it to $8 preflop. Let’s also assume that he’s willing to put all his chips in on just about every flop (a reasonable assumption for low-stakes online games).

You both had $200 and you’ve folded on the flop 7 times for a current stack of $144. The 8th time, you hit the set and double up to $288. In the short run, you may hit the set in less or more tries, but in the long run this scenario is still profitable.

Another positive is that many of your opponents will also be willing to risk all of their money with AK in a raised pot when they pair up on the flop.

The important point is that you should try to choose spots to play your pairs when it looks likely that you will double up. While your might get better pot odds and have to risk less in an unraised 4-way pot, you’re also likely to get any action when you hit.

If you aren’t on a short bankroll and you read your opponent as having a strong hand I recommend playing small pocket pairs much more than “the book” recommends.

If you actually observe high stakes games with better players and deep stacks, it is very difficult to get them off of any pocket pair preflop. This is because of the extremely high implied odds in this table scenario. Realize what you want your opponents to have and play accordingly.

While I would like to save future articles for extracting maximum value out of your small pocket pairs on the flop, I hope that I have given you some useful tips for making profitable decisions before the flop. In short, I think that tight strategy book advice isn’t always the most profitable for loose online games.

Situations like passive games and opponents who over-commit to big hands can make it possible to play any pocket pair for a call or even a small raise. However, this also the type of hand that requires extreme discipline prior to playing with confidence.

If you do not yet have the discipline to easily lay down your small pair on a tricky flop you’re probably better off sticking to those premium starting hands.