Bitcoin Cash Poker Sites – Who Accepts BCH And Is Legit? 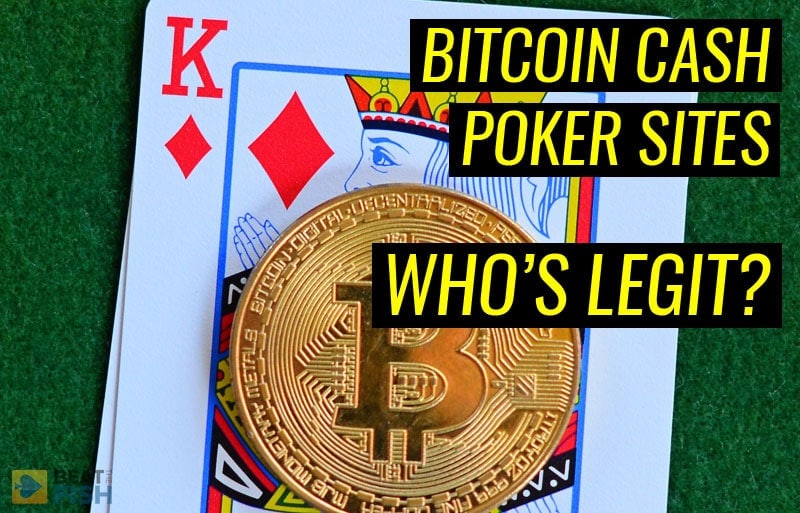 The world of cryptocurrencies is a confusing one to be sure. Keeping up with all the changes and developments takes some time and effort. Today, we’ll try to focus on Bitcoin Cash, an intriguing derivative of sorts of original Bitcoin and poker sites accepting Bitcoin Cash.

While there are certainly some who know all the ins and outs of cryptocurrencies and know the difference between Bitcoin (BTC) and Bitcoin Cash (BCH), it is safe to assume most poker players don’t, so we’ll try to make this article a step-by-step guide which should answer any questions you may have.

What is Bitcoin Cash exactly?

The idea of Bitcoin was born back in 2009, envisioned by an individual or a group of tech-savvy individuals going under alias Satoshi Nakamoto. Explained in the most basic way, Bitcoin was supposed to be the first decentralized currency, allowing people to exchange money and pay for goods and services without a central control of any government or institution.

Over the years, this idea really took hold, in online poker and other areas, giving Bitcoin a huge boost.

The idea of Bitcoin is certainly interesting and clearly it is something people are enthusiastic about (if BTC value these days is anything to go by), but it isn’t without its problems, especially on the technical front. It is these problems that led to the birth of Bitcoin Cash.

The idea of decentralized currency does sound great on the surface, but it is this decentralization that can also cause problems, especially when it comes to the number of transactions in a certain period of time as well as feasibility of these transactions.

If Bitcoin is to take a more central role and step up to take the place of fiat currencies, these problems must be solved. One of the most prominent solutions at this point in time seems to be offered by Bitcoin Cash.

Solving the issue of scalability

Everything described in the couple of paragraphs above is defined by the terms scalability. Many believed that these scalability issues needed to be addressed if people are to start treating BTC as a proper currency. So, in August 2017, Bitcoin Cash was launched as a hard fork from the main Bitcoin blockchain.

The fork allowed Bitcoin Cash to inherit all Bitcoin transactions up to a certain point but then started to reject any new ones, introducing a new protocol with a block size increased to 8 megabyte (instead of 1 megabyte blocks used by classic Bitcoin).

We could go further into details about differences between BTC and BCH and why there is (or isn’t) a need for Bitcoin Cash. However, it would take a lot of space and it is a very complex topic, more on which you can read on links from references.

What’s more important is – what does Bitcoin Cash mean for online poker?

Poker sites not discriminating against BCH

Those more familiar with the underlying technology and the whole idea of cryptocurrency will continue to have discussions about implications of having larger block sizes and whether Bitcoin Cash will actually help Bitcoin.

For poker rooms accepting cryptocurrency, however, the only important question is whether people are interested in having an option to deposit and withdraw in Bitcoin Cash.

Some online poker rooms have shown they’re willing to go the extra mile to meet their players’ needs and demands, introducing alternative payment options such as Bitcoin Cash.

As of right now, two rooms are leading the way in accepting Bitcoin Cash wallet transactions: Bovada and America’s Cardroom, the latter of which recently expanded to add several dozen crypto-currencies to their banking methods. What this means for players who have Bitcoin Cash is the following:

There’s absolutely nothing wrong with sites like Bovada introducing support for Bcash and we’re always glad to see players given more options, especially for US players who can never have too many alternatives to pursue one of their favorite pastimes.

If you already use Bitcoin Cash or are looking into getting some, it is certainly good to know there are poker sites that will let you deposit with it, without having to go through the process of exchanging into Bitcoin.

However, we must always look at things from all sides, and the fact is that Bitcoin Cash promises a lot, but we can’t be sure how realistic these promises are. Not all experts agree that the proposed solution will work, and the price jumps of BCH seem to agree.

At the moment, Bitcoin Cash is being prophesied as the solution to all Bitcoin problems that will take the whole BTC idea to the next level and finally give it a power to be be what it was originally meant to be. But, one can never be too careful.

Bitcoin Cash has its own issues

Although the idea of Bitcoin Cash sounds very good on the surface, there are some underlying issues with it, especially when considering it is basically the same thing, but in a different environment. Again, this is hard to really explain, but the price of Bitcoin Cash has been rather volatile when compared to Bitcoin.

This volatility is a big reason for people to be careful, especially for poker players who want to treat Bitcoin Cash as money and not an investment opportunity.

Play it safe with Bcash

Unless you’re really looking to speculate, it seems that the best approach to Bitcoin Cash right now is to stay on the safe side and see how things play out.

If you want to play Bcash poker, you can easily get some funds, but try to buy the amount you need for your bankroll and keep the rest in a fiat currency or even regular Bitcoin, which seems to be more stable at the moment.

Bitcoin Cash is still fairly young, so it’s still uncertain how the whole thing will play out.

Should you play Bitcoin Cash poker?

If we disregard other considerations about this cryptocurrency volatility, there is really no reason to avoid Bitcoin Cash at poker sites that accept it.

Bovada is an excellent room serving US players and they have a lot to offer in terms of game selection and other relevant things, so there is absolutely no reason to avoid it.

If you find it convenient or have some Bitcoin Cash lying around that you automatically received from the hard fork, investing it into your poker bankroll could be a good idea.

The creation of Bitcoin Cash and its use at poker sites is getting some decent media attention. Check out some of these extra sources on BCH and poker.